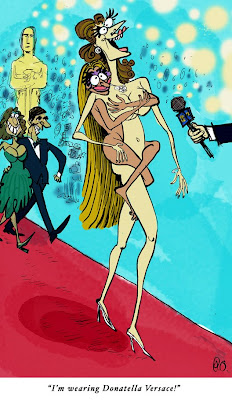 In case you were wondering what the stars will be wearing this year......
Posted by Patrick O'Connor at 11:08 PM 2 comments:

Email ThisBlogThis!Share to TwitterShare to FacebookShare to Pinterest
Labels: REALLY EXPENSIVE OUTFIT FOR ONE NIGHT 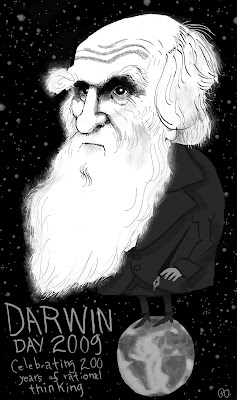 Today we are celebrating 200 years since the birth of Charles Darwin. Much maligned by the religious and true believers he is certainly one of humanities greatest thinkers. Here's a nice piece about the origins of Darwin.
Posted by Patrick O'Connor at 9:40 AM 1 comment:

Email ThisBlogThis!Share to TwitterShare to FacebookShare to Pinterest
Labels: GOT NATURAL SELECTION?

Posted by Patrick O'Connor at 5:37 PM No comments:

So, the first thing I thought I'd do with my unemployment from newspaper cartooning was take a red-eye flight to New York, put on a bunny sock puppet and play a multi-colored baby piano. 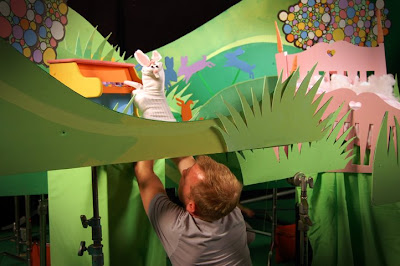 This is from a scene called "Bunnyland" in which a rabbit goes to heaven and finds a crazy bed with two sock puppets having sex next to a piano. The rabbit has gone to this place because he's been eaten by a large green monster with purple horns. 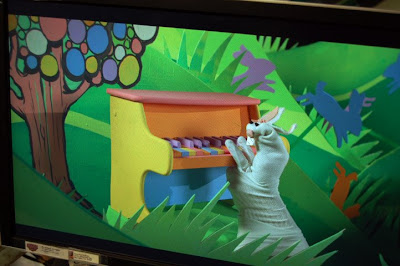 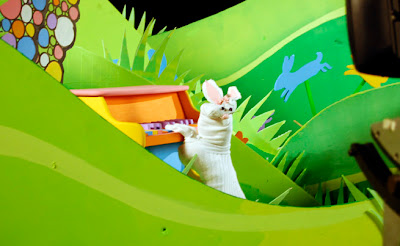 All this bunny madness was for a video my brother was making. A monster chases a bunny through the woods and he lands in a graveyard and makes his way into the heavens. Sean came up with the concept and I helped design some of the sets. He and small crew of talented individuals painted the sets and built puppet monsters and rabbits. Curious Pictures were kind enough to let us invade their studio for a weekend and shoot this crazy thing. Here's a sketch of the graveyard:

And what it turned into:

Here are some headstones I desined for the bunny cemetery and what they turned into: 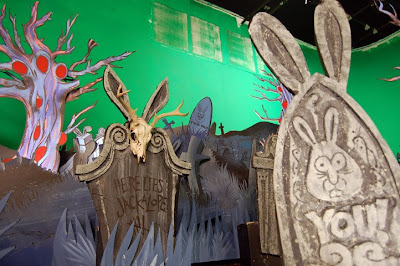 I also helped assemble all of this. It was a ton of fun as you can imagine. There's a cut away scene in which some sock puppet bunnies are cowering in fear in the middle of the woods. I designed this one and my brother painted it beautifully: 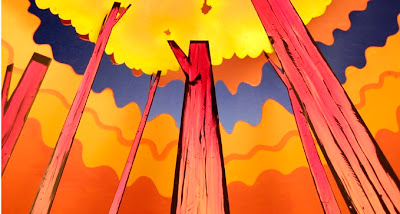 The cool perspective came from the way it was laid out: 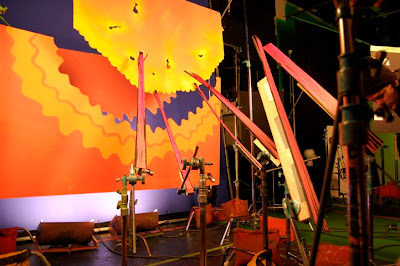 All in all it was a fantastic trip. I met and worked with a lot of really talented people, got to make some new connections and catch up on some old ones, and otherwise create interesting things. All the footage will now go into the editing room and hopefully something will come out on the other end. I'll be sure to post it here as soon as it's finished. 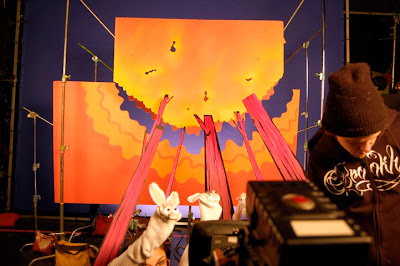 Posted by Patrick O'Connor at 4:21 PM No comments:

Email ThisBlogThis!Share to TwitterShare to FacebookShare to Pinterest
Labels: GET LAID OFF AND TAKE UP SOCK PUPPETRY
Newer Posts Older Posts Home
Subscribe to: Posts (Atom)